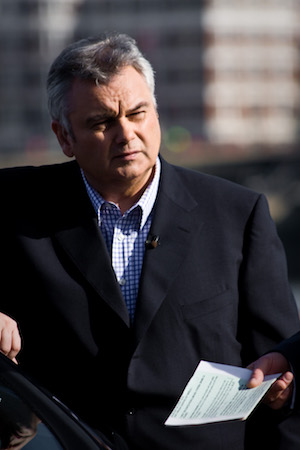 If you’re considering having your knee or hip replaced it’s a really big decision. Questions such as how much pain to expect, how long will it take to recover, what complications might there be, are all things that would need to be explored thoroughly before you make the decision to commit to the operation. But what about people who are recommended to have BOTH joints replaced at the same time?

It’s always helpful when someone in the public eye chooses to have the same operation you’re considering, as you’ll get the chance to hear firsthand how another person has approached the decision-making process and how they have found the overall experience.

It has been reported that Eamonn Holmes recently had a double hip replacement, and although he was anxious in the lead-up the operation, he is an advocate of the approach. Living with a joint that needs replacing can yield a whole host of problems; in Eamonn Holmes’ case his hip problems were affecting many other parts of his body too: “people think hip problems mean hip pain but it can also mean knee, ankle, foot, back, neck, shoulder and head pain. I had all those and more.” Having both hips replaced has given him a new lease of life – greater mobility, less pain in other areas and a more positive outlook on his health. Recovery may have been challenging at times – but definitely worth it.

Why would people choose to have both joints operated on simultaneously?

It’s a matter of personal choice. Some would prefer to have one joint fixed, recover fully from that and then fix the second once you’ve healed from the first. Others would prefer to have everything done in a single time period. Admittedly, in the short term it will be harder to have both done at the same time, but in the longer term, it is just one period of rehabilitation.

Eamonn Holmes is quoted as giving his reasons for having both done at the same time as he wanted to get it all over and done with in one go: “I couldn’t have faced all the pain and disruption of major surgery to then have it happening all over again a few months later.”

Who is suitable for a double joint replacement?

Given the added strain on your body of having two joints replaced, rather than just one, there are certain requirements that patients must meet to be considered suitable. Double joint replacements are not recommended for people over the age of 75, for example, and as a rule of thumb, “patients must be in excellent physical condition, aside from the arthritis, and have no underlying health problems.”

You might think that if you have both knees or both hips replaced you should expect a lengthy period of bed rest – think again. You will start to get out of bed with the physiotherapists the day after the operation and you will be encouraged to begin physical rehabilitation very quickly. The sooner you begin working your new joints and encouraging the muscles to work again, the faster you’ll begin to heal and your new joints will begin working in tandem with the rest of your body.

If you need both hips or both knees replaced then the most sensible starting point is to draw up a list of pros and cons of having both done together or staggering them. You’ll soon be able to identify which option looks best for you, but if you’re in any doubt, don’t make the decision alone. Your GP or surgeon will be able to help outline fully the benefits versus the risks so that you can make an informed decision, ideally with the help of family and/or friends who will be supporting you through whichever option you choose.

Maps were disabled by the visitor on this site.
Osteoarthritis and lifestyle changes explained New trial to look into prosthetic joint infection Scroll to top